How to be successful by using self-generating phenomenons

First, what is a self-generating phenomenon. It is a process, technology or anything such that creates output that increase the process itself and that in turn increases the output. Let's look at some examples to explain:
Training and sports. The more people are into sports, the more sports shops there are in town. The sport shops want to increase their business, so they do advertising and sponsor sports events. The more advertising and events, the more people are into training and sports. The loop goes around until a logical maximum is reached and all the possible people who can be won over to sports are there.
Tourism. Apparently Stockholm is earning the most from tourism among the Scandinavian city's. This means that it makes a lot of sense for companies, museums and restaurants to offer services for tourists. The more tourists the more flight, boat, train and buslinks there can be profitable. The more there is to do in a city and the easier to get there, the more tourists are tempted to go there. Tallinn provides a wonderful example of such a self-generating loop and the growth of the number of tourists visiting Tallinn has been growing for 20 years.
Money. The more money one has, the more it is possible to invest and earn with it. If invested wisely the more you will get, which in turn makes it possible to earn on investments more. This self-generating loop has the unfortunate downside on the individual or corporation level of rich becoming richer and poor poorer and therefore outside parties (like the gevernment) need to controll this process. But this process works also for countries. If you have a lot of debt you get poorer and if you have a lot of investments you get richer.

....and there are many self-generating loops in IT and technology also.
Smartphones and Apps. Would you have developed an app. for a mobilephone in 2005? Probably not....there were not exactly many potential customers around. Nowadays, tens of millions of smartphones means there is much sense in developing apps, TV on mobile, location services, e-books, games and so on. This in turn means that there is much more to do with your smartphone so you buy one. And if one buys a smartphone then it again makes more sense to develop for smartphones.
Authentication, the ID-card. When ID card was introduced in Estonia there were no services where you could use it. There were no services in turn, because people did not have ID-cards, or card readers and lacked the interest. In due time this vicious circle was turned into a positive self-generating phenomenon and now all services have ID-card authentication because everybody uses and demands it.

Understanding these processes is very important because if you manage to jump onto one in the beginning it will be like cycling with tailwind. You are finally at the right place at the right time and the process of positive feedback increases your success. A good example here are the first real-estate, used things, discussion and news portals like City24, Auto24 in Estonia or Hemnet, Blocket in Sweden or Suomi24 in Finland. Announcements were put up there, because the customers were there and customers were there, because the announcements were there. By now they have became phenomenons themselves and it is almost impossible to build a competing portal now.

It is usually possible, but time consuming and expensive to start a self-generating phenomenon. You usually have the egg-and-chicken problem and need to invest heavily into "the egg" before the chicken comes along and the process starts to get positive feedback. Here timing is also really important - if the prerequisites are not there you might have to wait for too long. Some examples:

Amazon is currently planning a major shift in online sales and building warehouses so that they could deliver on the same day to everywhere in USA. If they are successful in setting that up then online shopping could become a self-generating phenomenon, because getting the goods on the same day means that more people will shop online. That in turn kills offline shoping, making shops go bankrupt and their selection worse and therefore again making online shoping more popular. But imagine the costs and risks of setting up warehouses all around USA (or the world) so that delivery can be made the same day.

A social network is a self-generating phenomenon in itself because the more people there are online the more new members they attrack. Some months ago I believed that Google+ could get this positive feedback loop going, but I think they are still not there and might fail. Again the investments have been huge.

Fighting a self-generating phenomenon is extremely hard and expensive. Sometimes though very necessary. For example city districts becoming a ghetto is something a municipality and the society should fight with all they got. We should also fight seriously the positive feedback loop of polar ice melting->ice reflecting less heat back to space->earth becoming warmer->polar ice melting. (So take the bike instead of the car and spend the money on theather instead of buying useless things transported from the other side of the world. :-))

One should avoid fighting the phenomenons when it is useless. For example try to avoid making another "daily deals" portal.

- December 29, 2016
Here are some statistics from Recommy.com about usage of different platforms.

Recommy.com is a service for companies for asking feedback from their customers and analyzing it. Recommy works so that feedback requests are sent to the customers with an E-mail. The customers click on a link in the E-mail and go to the Recommy webpage where they fill in the questionnaire and give feedback to the company. So here are some general statistics about the platforms that people use to land and access the Recommy page where they give feedback:

The revolutions that change the government tend to be noisy and bloody affairs, but the revolutions in technology and economics happen rather silently. This is because true technical revolutions happen when people start to take a new phenomenon as a normal everyday thing and don't even notice that they changed their behaviour. And one such thing is now happening in Estonia - the radical change in the last mile delivery. As an indicator, here is a list of changes that have happened in the last 5 years:

There are now 3 parcel terminal networks operating in Estonia. Omniva, SmartPOST and DPD. Therefore there is competition and prices are driven down. Most E-shops are integrated with some or all of them.
There are at least 5 online grocery supermarkets that offer home delivery: Selver, Coop, Fresh and Go, Barbora (the shop previously known as Maxima) and Prisma. One of the latest innovations is done by Coop, who offers grocery lockers that are refrigerated and to where you can order f…
Loe edasi... 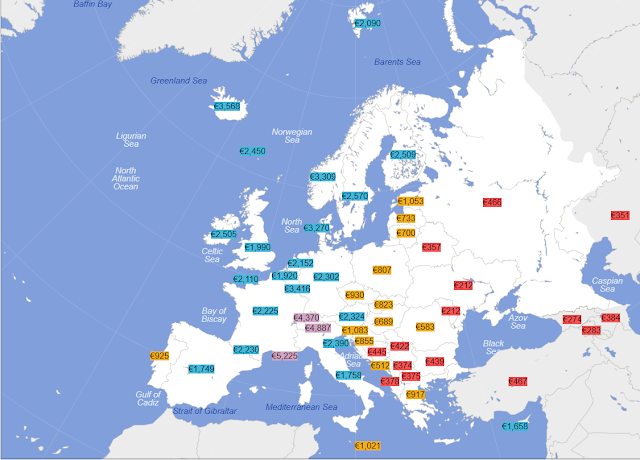