- Capitalism (mostly) works: people prefer to pay less, companies prefer to invest into areas where there is more business and more profits to be made. It seams silly to write this statement but in energy production we have seen a lot of hope and wishes, but in reality - if making electricity from natural gas is the cheapest option then companies will build gas powerstations no matter how green their logo is.

- Politicians (and when it comes to economics then also dictators) (mostly) do what people want. How do you know what people want? Well you can listen to what they say, but the true wishes are demonstrated by what they buy. So if people buy SUV-s, vacation trips to the other side of the world and fast-fashion, then the politician who wants to be popular, has to work on cheap fuel prices to ensure this.
For example, if people would want to stop climate change then they would drive less, fly less, buy less stuff and would demand green energy, sustainable products regardless of the price. Politicians in that case would then work on changing the energy to green and products to sustainable.

The situation before Autumn 2021:

Producing electricity and heat from fossil fuels like gas and oil is cheap and simple. You drill a hole in the ground, the fuel comes out, you pump it to a powerplant and produce. Proven tech that humans have been using for over 100 years. However there are 2 problems. Firstly, as we know, it causes climate change and pollution which results in all of us, including the animals and plants, potentially dying after a few decades. Secondly, and more short term, there are the guys who own the source and can turn off the fuel if you don't pay them enough.

Wind and solar electricity production is nowadays also technically cheap and simple....when the wind is blowing and the sun is shining. When they are not, then you need solutions of energy storage and these are not yet cheap and simple. There is potential and possibilities (for example the sand heat storage system: https://www.bbc.com/news/science-environment-61996520), but some development and investment is needed.

The third option is nuclear. Unfortunately movies like The China Syndrome and Chernobyl have made sure that people are afraid of it. Hollywood really can change peoples minds. Do you know for example that sharks kill only about 4-5 people every year, while people kill about 100 000 000 sharks every year. About 1 300 000 people are killed in traffic every year so we should be 260 000 times more afraid of cars than sharks. But thanks to the movies Jaws, Jaws 2, Jaws 3, Jaws: The Revenge and on the other side endless number of The Fast and Furious movies, people think that sharks kill and cars are cool. In reality cars kill and pollute and sharks are an essential part of the ecosystem keeping us all alive.

Climate change has really started and for some years people have demanded politicians to do something about it. This has had results. However if you look at the real wishes of people by looking at what they are buying then the message is: "I want to drive a SUV and fly to Thailand for vacation and I want cheap fuel for this, but you politicians have to do something about the climate change". The solution from politicians has matched that wish really good: "For now we try to ensure cheap fuel for consumption, but we can already now make a promise that in the future (like in 2050 when I will be retired or dead for some time ago) somebody will do something about the climate change."

But things are not that bad and there has also been massive progress! There have been many important positive steps in fundamental technology, production technology and also economical-political solutions for implementing renewal energy production and also electric transport. I don't mean only  electric private cars, but more importantly electric bikes, electric scooters, trains.

What really changed was that Putin's Russia started to play with the gas and oil valve more aggressively. Small change, but this switched the energy economics into a different mode. Fossil fuel prices skyrocketed and thus made gas-electricity by far the most expensive one. As importantly it made it clear that the supply of gas and oil is unreliable. Would you build a gas power station now? Would you get a bank loan for it if your business plan says: "The fuel price is probably something from 1 to 16 and there might be times we cannot buy natural gas at all"

This switch made renewables and nuclear much more competitive. The crisis also demonstrated quite vividly that the main priority for citizens is the price. Have you noticed, that the first thing politicians had to say was "We will support, cut taxes, turn on coal plants, subsidise and make everything to get the prices cheaper". The message was not "Hurray, prices of fossil fuels go up, consumption goes down and we are a step closer to saving the planet"

Now the market situation is really favouring renewables. With current electricity prices and inflation the ROI of solar and wind powerplants is ridiculous. Probably something like 3 or max 5 years. It has never been so short even for gas powerstations.

So we will see a massive deployment of solar and wind turbines. When it comes to solar then I am talking about:
- Every parking-lot should  have a roof with solar panels. (Underneath is a photo of an IKEA parking lot that already has such a roof)
- Every roof should be a solar energy production unit.
- Why not install solar panels over sidewalks, railroad lines, roads. It makes much more sense to install them there than on the fields as we are currently doing.

A massive amount of renewable energy means that the Nordpool electricity price will be very volatile. It should be almost zero when the sun is shining and wind is blowing and become expensive (500eur+ per MWh) when it is cold and there is no wind or sun.

This price volatility makes it economically viable to build systems that make use of it. It does not make sense to build a battery storage system if the price of electricity is always the same, but if it is 1eur at 12:00 and 35eur at 24:00 then it starts to make sense.
The electricity and (heat)energy storing systems are not the only one's that can make use of the volatility. We can also have energy intensive production that works only when the price is low. Most importantly all the electric transport can and will take use of the cheaper energy prices when the renewables are working.

The systems utilizing the lower energy prices are in turn important, because they will push up the price for the time when the sun is shining and wind is blowing and thus make it reasonable to build more renewable capacity. 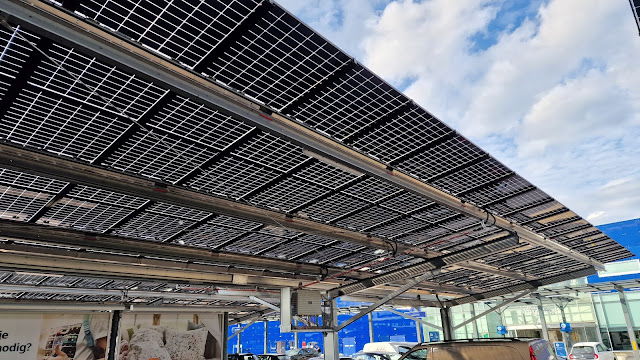 When it comes to nuclear then hopefully we will get reactor technology that is smaller scale and cheaper and faster to implement than the traditional reactors. It is on its way as I understand. What the energy crisis of 2021-2022 has shown us is that for people price is an absolute priority number one. People are not even afraid of an climate apocalypse that all scientists have predicted of hitting us in maximum 20-30 years if avoiding that would mean higher prices and thus buying and travelling less. So it is very much possible that the fears created by a few movies will be overcome if nuclear could provide 2-5 times cheaper MWh prices.

For the coming years we will have also fossil fuel electricity and heat production. No doubt about it. We need it for the cold windless days and it takes years to roll-out renewables and nuclear. The transition to electric cars also means that we will have much higher demand for electricity. However, thanks to roll-out of solar, wind and in perspective also nuclear power + energy storage systems, we can gradually use less and less of fossil fuels. It might even be that we can shift to using "some fossil fuel energy on some days a year" could happen surprisingly fast.

The revolutions that change the government tend to be noisy and bloody affairs, but the revolutions in technology and economics happen rather silently. This is because true technical revolutions happen when people start to take a new phenomenon as a normal everyday thing and don't even notice that they changed their behaviour. And one such thing is now happening in Estonia - the radical change in the last mile delivery. As an indicator, here is a list of changes that have happened in the last 5 years: There are now 3 parcel terminal networks operating in Estonia. Omniva, SmartPOST and DPD. Therefore there is competition and prices are driven down. Most E-shops are integrated with some or all of them. There are at least 5 online grocery supermarkets that offer home delivery: Selver, Coop, Fresh and Go, Barbora (the shop previously known as Maxima) and Prisma. One of the latest innovations is done by Coop, who offers grocery lockers that are refrigerated and to where you c
Loe edasi...