- August 17, 2018
One of the main parameters of an economy is the average net salary and I have been following that on my blog for some months now. Here is my short post about the last comparison: http://www.pilveraal.ee/2018/06/euroopa-keskmise-palga-areng-2018.html

As I work in a data and IT company Solita and am surrounded by data scientists, engineers and developers, then I cannot only settle with following the stats but want to find the reasons for some economies doing better than the others.

As a first step, let's see if the countries Ease of doing business ranking is related to the average net salary or can predict the change of the salary. If there is a correlation then it gives a clear message that working with the things that are measured by the Ease of doing business index makes people richer. No political discussion needed just copy what countries on the top of the list are doing and you get rich. :-)

In East-Europe the picture is different and there seems to be a far greater correlation between having rich neighbours and high salaries than between ease of doing business and high salaries. However, on regional basis there is a relation. For example if you group countries like:
- Czechia, Slovakia and Hungary
- Slovenia, Croatia
- Romania and Bulgaria
or maybe even the Baltic countries you can see that ease of doing business does convert into higher salaries. 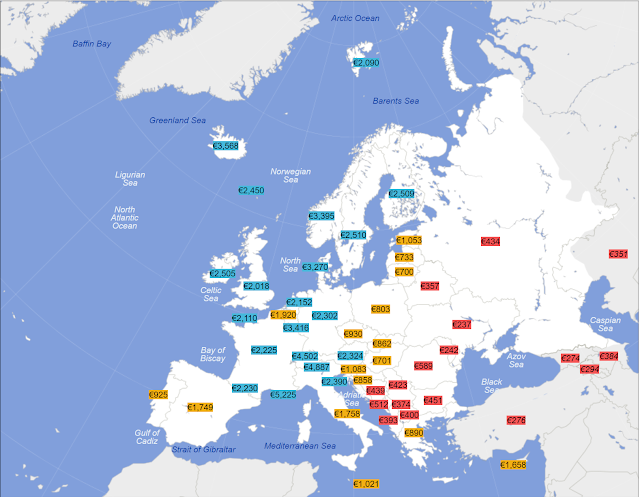 In the bottom of this post you will find a table with the EEA countries, their ease of doing business ranking and average net salaries. However, for analysis purposes it is clear from the data and visible on the map above that it does not make sense to put all the countries in the same pot=on the same graph, so I did some grouping - an operation that would not be allowed in real-sciences, but could be OK in social sciences like economy and history. I grouped the countries to West and East. I also thought if it would make sense to make a separate graph for Switzerland and Luxembourg, but decided to leave them on the Western-Europe graph. So here they are: 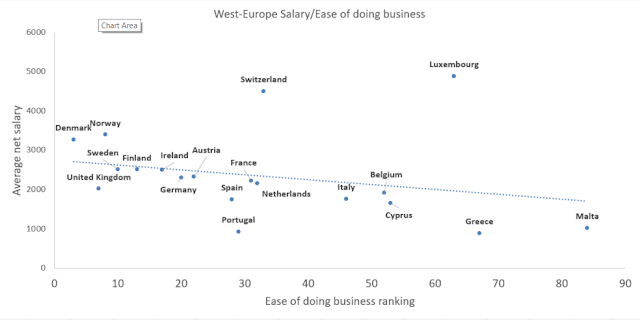