How to make it so that people working in a big corporation would feel and work like in a family business?

- January 08, 2013
"How to make it so that people working in a big corporation would feel and work like in a family business?" This is a vital question if one wants to run a successful big corporation. It is the employees who make the difference between good and bad service and success and bankruptcy. If the employees work with the same care and soul like they do in a family business then the chances of success are great. So how to achieve this?

In my experience the maximum number of people in a team that acts like a "family business" is somewhere between 10-20. If the number of people in a team grows over 20 then it becomes hard to keep a 100% one family feeling and a split into smaller units is advisable. So if there are hundreds or thousands of employees then the key question becomes how to organize them. A corporation having such a number of employees is probably offering more than one service or its service can be logically divided into different areas.
The first and the most logical way of organizing a company is around the services. For example let's take an imaginary company offering 5 quite different services ranging from "Home entertainment" to "Sales of gadgets". The way one could organize this company is to have units or divisions that offer these services. For example have the Simpsons family taking care and developing the "Home entertainment" service. 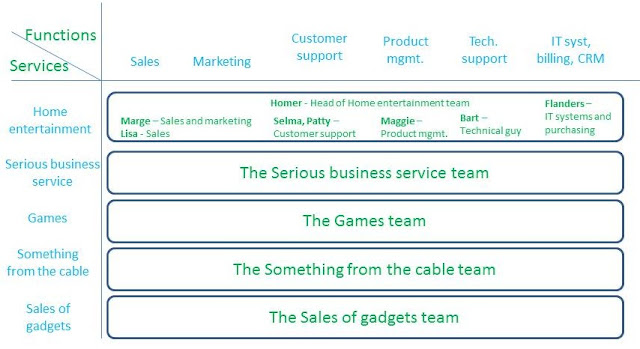 In a setting like this it is quite easy to create "a family business" mood. All you need is to give Homer good  management training, set proper goals, let him pick his team and give some time. Everybody in the "Home entertainment" and also other teams knows what is their role at work. The focus is on the service and on the customers. The end-to-end responsibility for the service is in place and the first manager who can address rising problems due to different opinions or personalities is low in the hierarchy. Which is good.

But there are a few downsides to this structure. These are due to the "us-and-them" line being between service teams and they will appear in two ways. The first issue will appear if there is a need or a business opportunity to jointly offer services. For example if there are customers using two or more services and want to use just one Customer Support phone number or the business managers see that offering two services for 1,5 price would be an opportunity. The joint offering demands very much effort in an organization like this because the "us and them" line that lies between the teams needs to be crossed. The second issue are costs. This issue has a real component - for example running multiple customer databases is surely a waste and in the worst splits there could even be multiple offices to house the different teams. There is also an imaginary cost issue. Imaginary meaning that it looks like a savings opportunity but actually is not. For example one might think that if Lisa is visiting the customers and telling them about "Home entertainment" she might as well tell them about Games and sell them some gadgets at the same time. This opportunity is imaginary as enforcing this change either means a lot of training for Lisa or less time at the customer or less expertise from Lisa. 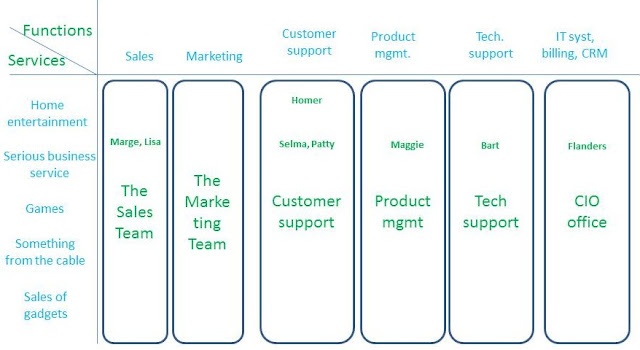 In this model the teams are organized according to the functions. Lisa and Marge can now sell all the services. The sales process will be therefore effective. (or will it?) Homer, as a seasoned manager, is now head of all the Customer Support, not only the Home entertainment. His goal - offer the best Customer Support for all the services with the least costs and to unify the tools and processes of Customer Support.

By implementing this structure pretty soon all the co-operation problems between services start disappearing and everything will be OK....? Well.... not exactly. If all the teams are working towards their goals and the managers are good in trying to build an in-team "family business emotion" then the in-team processes will become effective, costs will be low, but so will also be the level of service. As no-one is taking care of the end-to-end service then the quality will become low, there will be process brakes. The marketing team would launch a huge campaign at the same time when customer support is laying off people and tech support is changing the platform. Or more commonly - everyone is making their processes effective and no-one is actually developing the service. This will in turn affect the motivation of the employees and one can never have a family business like emotion in an organization model like this. But this is not to say that a model like this is not suitable for some organizations. For example utility companies offering water or electricity and not in the need to keep up with the radical development and competition work probably best and most effective in a structure like this.

So how to make a family business like way of working in a large organization? The truth lies between these two extremes. In an official or un-official matrix structure. (Well I never thought I would propose it. :-)) One could have both groups who are organized according to functions, but also virtual teams that are organized to provide and develop the services or vice versa (does not really matter). The service teams could and must use the function teams as resources and co-operate tightly with them. Perhaps something like this: 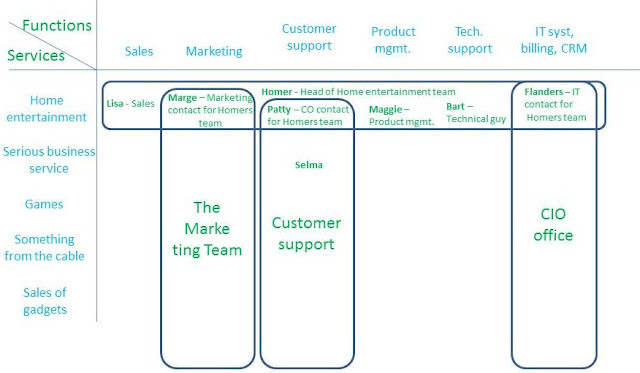 In this scheme Homer could be given the authority to build a team of both his team members and get support in the way of contact persons from other teams. It is important though that he can tell all the team members that they are one team and are making the best service for their customers. The team is also fully responsible for the service and cannot blame anyone else for problems.

However some important notes about this and organizational structures overall:
- The simpler the better
- Structure and especially virtual teams should be made according to the people in the company and their will and not vice versa.
-  Everyone should have at least one (virtual) team - a family - that works with the same services, topics or problems as (s)he.
- It sometimes might be that the heads of the virtual teams (with no official employees) must be more capable, more energetic and probably even higher paid than some of the line managers. Because if in a setting like this you have a bad line manager then it influences one part of the service and can be fixed by the virtual teams working directly with the specialists. But if you have a weak virtual-team service manager then you lose the whole service together with the family feeling.

And it is in these service based virtual teams that the family feeling can be created and they will be the cornerstones of the organization.